California is one of few states in the USA that allows for third parenting which can arise due to a number of circumstances. If you and two other adults are considering a three-parent setup for you and your child, talk to one of our experienced Laguna Hills family lawyers at Trevino Law by calling 949-755-8542 today. 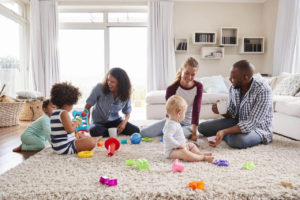 Traditionally, the parental family setup has always been a heterosexual couple- one mother, and one father. As times passed, we realized that parents need not be formed only by couples of the opposite sex; same-sex couples can also be parents that are just as functional as the traditional definition of what parents are.

Yet again, these definitions are being pushed further. A decade ago, the California family court found that a child did not only have two parents – he had three. This was because the wife in a married couple had an affair with another man who was not her husband and she conceived and later gave birth to the child.

The husband discovered the affair, but did not leave his wife. They also allowed the biological father to interact with the child when the child was young by allowing him to spend weekends and some weekdays with the child.

According to California law, the husband is the legal father of the child because he was married to his wife when she gave birth to the child. This assumes that he has physical custody and legal custody of the child along with the wife.

However, since the biological father was able to welcome the child into his home and openly showed that the child was his own, the court deemed it satisfactory to assume that he was also a presumed parent. If the law were to insist in this case that there are only to be two parents, which man would they assign as the only legal father when both men are equally deemed to be  fathers in the eyes of the law?

The major turning point for the three parent law was in 2013 when a lesbian couple’s child ended up in foster care and the biological father was not able to gain custody of the child. Because of this, the state of California signed into law Senate Bill number 274 (SB 274) which allows a child to have more than two parents.

The goal of enacting this bill is to ensure that a child will not have to be separated from his parents like in both cases above because it is detrimental for a child to have any parental figure stripped from them. It is for this reason as well that before they are approved, triparental setups are closely studied and undergo custody evaluations to ensure that it is, in fact, for the betterment of the child.

It will also be the responsibility of all three parents to decide important factors in their child’s life and upbringing including schooling, religious activities, extracurricular activities, and the like.

If you have any more questions regarding child custody laws including joint custody or shared custody, the sole custody of a child, and custody mediation, don’t hesitate to ask for legal help from a skilled child custody attorney. Our child custody and child support lawyers in  Laguna Hills, CA are experienced in child custody cases and committed to helping parents create safe and stable environments for their children to thrive in.

For a child to legally have three parents, the parents will have to submit a parenting plan, also known as a custody and child visitation agreement which will establish time-share, the schedule that each parent can spend time with the child, and decision-making responsibilities regarding the child’s education, health, and welfare.

A California parenting plan will ensure that each parent knows his privileges, and more importantly, parental rights and responsibilities, towards the child. This is important for the needs of the child to be met as well as to avoid conflicts among the parents. Avoiding conflicts ensures that a child can grow in an environment that is peaceful, stable, and conducive.

Our skilled three parent law attorney in Laguna Hills, CA can assist you in creating a parenting plan that’s in the best interest of your child. This means that it should be able to:

And on the side of the parents, it is also important that they are all able to:

This parenting plan will be signed and brought to the court. Once it is approved and signed by the judge, it will be filed with the court and will be in effect.

Once the parenting plan is in place, it is important for the parents to be flexible as well. On some days, the child might be feeling unwell so he may not be able to move to the indicated parent’s house.

Also, even if we set specific time periods for each parent to spend time with the child, we do not know how long a child can be away from a parent and we must listen to them about their needs. Parents must be able to adjust and always put the child before anything else.

If you need help establishing a parenting plan in California, our three parent law attorney in Laguna Hills, CA can help you come up with an arrangement that has your child’s best interest in mind. Schedule a consultation with us by filling out the contact form or calling 949-755-8542 today.

Steps in Writing a Parenting Plan

In general, you will need:

Once all the forms have been filled, all parents must sign the Stipulation and Order for Custody and/or Visitation of Children (Form Fl-355). Each parent must be aware of the implications of signing this form and must sign it voluntarily.

Once they have been corrected, you should make copies of the form so that each parent will have a copy each. The original form will have to be filed with the court.

You will then submit the original and the copies for signing by the judge. Each court will have its own process to facilitate this, so make sure to ask your local court regarding this.

File Forms with the Clerk

Once signed, you can then proceed to file the forms with the clerk. Be sure to file the original and distribute the copies among the parents. After filing, the parenting plan will then be officially in effect, essentially becoming a court order that must be observed.

If you are considering entering a shared parenting setup with three or more parents, be sure to consult with our trusted Laguna Hills child custody lawyer from Trevino Law. We will help you navigate the child custody law to see how you can have your family be recognized and protected by the law.

Call us at 949-755-8542 to schedule a consultation and get legal help with family law disputes such as divorce, spousal support, jurisdiction, property division, and more in Laguna Hills, CA and surrounding California areas!